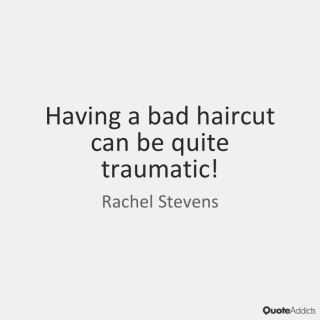 So this past Friday, I went to go get a new style haircut and what I thought was going to look awesome, turned out to be a nightmare.
Most my life I have been so insecure about the way I cut and do my hair. I use to be so self conscious about my ears showing so I rarely had my hair up and I would never get haircuts that would show off my ears. I use to be teased about by ears a lot when I was young, up until my teen years, so I was traumatized about them showing.
I started gaining self confidence and started experimenting with different hairstyles. First I got the A-Line, then I went a little shorter. It’s hot in Vegas. Then I decided to try a really short cut and got the Asymmetrical where one side would tuck behind my ear and I loved it. I finally felt better about myself, until this cosmetologist totally killed all my self confidence in a matter of 20 minutes….
Last Friday I went to my normal place I usually go to get my haircut. I have gotten 2 really awesome hairstylist the last few times I went there but the first one quit and the second one wasn’t there and no one told me that she was coming in later. so, I took a chance and let someone else do it. I figured, since I have had such good experiences there the last 3 times I went, that I wasn’t going to have an issue with someone new doing my hair… Boy, was I so very wrong…
So I went in with an Asymmetrical but I wanted it shorter and just a little bit different. I had a video of a girl from YouTube, Sarah LouWho, with the idea of the hairstyle I wanted. I had watched this video multiple time for weeks before I actually decided to get it. It is shaved in the back which is why I was so hesitant about getting it. I have never had my hair shaved in any way. I finally went in and showed this girl the video and explained on top of that, just how I wanted it. I thought she understood what I was asking for. She took out the clippers and I put my head down and pulled out my phone to look at the video one more time, because I thought she was going to shave the back. Well, she shaved a whole chunk off the side of my head. I looked up and asked her what she was doing and she said, “Oh, this side was shaved short in the video.” No it was not. It was clear that it was not. There was no fixing what she did so she had to continue. I left the salon almost in tears. The haircut she gave me was not even close to what I had asked for.
When I got home, I tried to do everything to get myself to at least like my hair but everything I tried made me feel worse. I did not see how my hair could be fixed because it was completely shaved on one side. I cried for a good 2 hours. I even almost bought a wig. That’s how bad this “hairstyle” was. I finally called the salon back to express how upset I was and My normal hairstylist was there and answered the phone. She told me to come in and she would see what she could do to fix it or help me find flattering ways to style it. The look on my stylist’s face when I walked in was the look of horror. I had women tell me in my mom group that it looked good, it fit my face, ect… It was very awesome of these women to try and make me feel better. But Teddi, My hairstylist, was 100% honest and said that she can’t really say that it was a good cut, because it wasn’t. 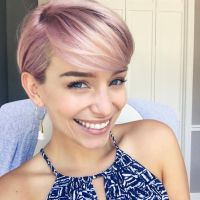 This was the style I wanted but did not get even close to getting. 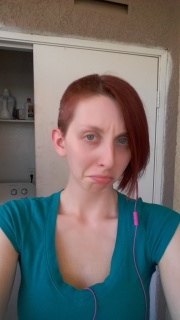 This is what I got but most certainly did not want.
There are so many things wrong with this haircut besides the fact that it looks nothing like what I had asked for. I wouldn’t have minded the shaved part so much if she had moved my part way over but she did not do that, obviously. Having it shaved on one side and long on the other was way to dramatic of a look and very unflattering. I didn’t feel pretty nor like a woman anymore.
It took the ideas of 2 hair stylists and one random lady in the salon getting her hair done next to me to fix this nightmare. I honestly didn’t think there was a fix to this. I was prepared to wear a wig until that side grew back out, which would have been awful because of how she shaved it up to my part and my part being where it was at. The hair at the top is going to grow, sticking up because it’s on the top of my head instead of down like the side of my head.
Luckily, Teddi was able to fix it. Thank goodness. And she did the hairstyle I originally wanted.
I’m sure you all are wondering how she did it when one half of my head it completely shaved, huh? Haha.
We will just call Teddi The Hair Wizard.

This was the awesome fix. 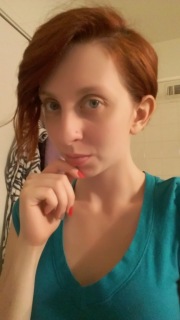 She even curled it for me.
Unfortunately, that shaved side is still there but I can work with it now that it is not visible. I was honestly amazed that she gave me the hairstyle I originally wanted. 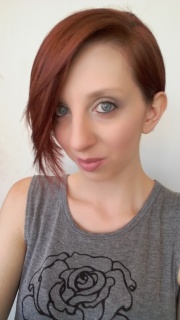 I couldn’t thank Teddi enough for saving my hair and making me feel pretty again.
On the up side of my shaved head, my hair will be super healthy when it grow back in. Hahahahaha.
Would I ever do that again?
Absolutely not.
Will I ever go to anyone besides Teddi again?
HELL NO.
Teddi will be the only one ever doing my hair.