So My husband got a new (BETTER) job that required him to go to Bakersfield, California…So we decided to make a mini vacation out of it. It was Averie’s first long car ride! Surprisingly, she did really well. We had multiple stops due to diapers, bathroom breaks and food of course but Averie did not cry once the whole way here. She might be one of those babies that hardly cries at all…*Knocking on wood* However, getting her to sleep last night was just awful due to time change especially. *Sighs* Now she is going to be getting up earlier for a while.

The drive here was long but fun actually. The husband and I sang the whole way here and the scenery was just beautiful (Well some of it. We saw a lot of graffiti..). Maybe I just think it’s pretty because I have lived in Vegas my entire life and see desert and just dirt everyday.. Lol 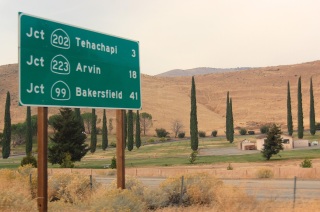 There is actually trees and GREEN here. I know parts of Nevada has green but not where I have lived my entire life. Unless it’s fake. ~Let me just say how awesome the action mode is on my camera.~ We were driving when I took the picture and somehow I managed to get the sign in the picture.

This was one of the coolest things I have ever seen. I know what you’re thinking… “She doesn’t get out much.” And you probably are right. I’m a mole. No, I don’t keep my daughter locked up with me, she is the reason I leave my house. Lol

In case you were curious about these wind turbines, here is the info. Pretty cool actually.

Increasingly popular as alternative sources of energy, wind turbine generators are a type of windmill that produces electricity by harnessing the wind. Wind turbine generators are much less harmful to the environment than burning fossil fuels, but they do require average wind speeds of at least 21 km/h (13 mph). The largest of these windmills stands 150 feet tall with blades half the legend of a football field. The compartments at the top containing the generator, hub and gearbox weigh 30,000 to 45,000 pounds.
A wind turbine’s cost can range upwards to $300,000 and can produce 300 kilowatts – the amount of electricity used by a typical household in a month. Almost all of the currently installed wind electric generation capacity is in California. The high-tech megatowers are engineered in cooperation with NASA and nursed by federal and state subsidies. This wind farm on the San Gorgonio Mountain Pass in the San Bernadino Mountains contains more than 4000 separate windmills and provides enough electricity to power Palm Springs and the entire Coachella Valley.
Here are some other Pretty pictures I was able to capture.

Erich Liked this mountain because of the sand going down the middle. He said, “OHHH Babe, why aren’t you taking pictures?!”

Landscapes have always been my favorite thing to take pictures of. They hold still a lot better than people. Lol
Here are some other pictures just because. 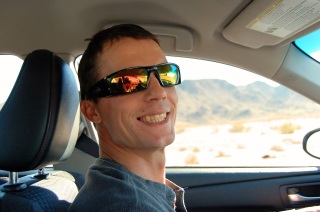 My Husband and his cheesy smile. LOOK! No more facial hair!!
He has been growing out his beard for the last 2 years and was so proud of it…Then his boss at his new job told him that all his facial hair had to go. He was genuinely sad. 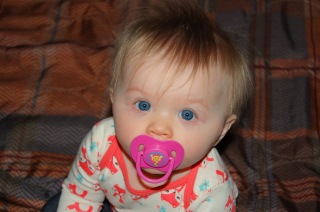 And Pictures of Averie of course just because she is cute!