Skip to content
No one told me that my baby would grow so much overnight! WHAT THE HECK!
She is already 4 months old! This makes me sad but it also makes me happy and proud. Honestly, I don’t know what I am suppose to feel! LOL
It is so amazing to watch her grow everyday and learn new things!
She has learned to laugh like a normal human being and not squeal like a piggy. This has to be my favorite!! She’s also learned where her feet are, how to stick her tongue out (She does this all the time now). She even tries to sit up by herself now! She’s almost got it but her head is just too heavy still. She wobbles to the sides and bobs forward. Lol.
Unfortunately, My baby girl is already teething. She has her good days where it doesn’t seem to affect her then she has her bad days where she’s fussy all day! 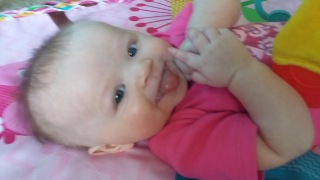 She has such a personality already.
Her Likes:
-Mickey Mouse Club House
She absolutely loves this show. She giggles at funny parts and she will watch a whole episode.
-Baths with her momma
At first, she didn’t care for baths then she tolerated them but would get mad when I dried her off but now that she take sone with me, she is all happy from start to end!
-Daddy’s Beard
The first time she grabbed on to his beard and pulled was so hilarious! Every time he kisses her face, she’ll always try to grab and pull his beard!
-My phone -_-
She tries to take my phone from me and gets mad if I don’t give it to her. She actually tries to push the buttons.
Her Dislikes:
-Waiting for her bottles
She gets so worked up if she sees me making a bottle. I guess she thinks I don’t make them fast enough!
-Anyone else but mom
Usually around 9 pm, Averie gets so fussy and doesn’t want anyone to hold her but me, not even Erich. She will scream until I pick her up.
She Still doesn’t have too many dislikes. 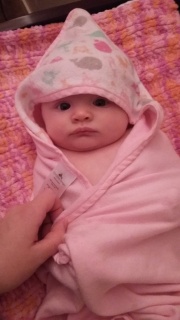 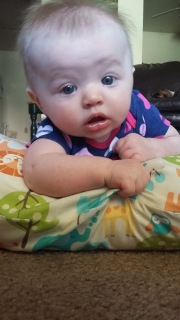 She finally enjoys tummy time!
(Well sorta, she more like tolerates it.)
She is so fun to play with now! (Not that she wasn’t before lol)
She smiles when you tell her you’re going to get her feet and then will stick them in your face. She loves to put in the air. (I made the mistake once and held her in the air after I fed her and she puked all over my face) She Never wakes up in a bad mood in the mornings. I wake up to her giggling and staring at me.
I can’t believe how big and smart you’ve gotten. You are such a happy girl and bring so much happiness to everyone around you. You keep momma active for sure. I love you Averie. I DID NOT SAY IT WAS OKAY TO GET OLDER! I want you to be tiny forever but I guess you have to grow eventually. hopefully later than sooner… way way way later!!!
I love you Averie Baby!